February 2nd is a special day in the Harris family. It is always easy to remember for three reasons: it’s Groundhog Day, my daughter was born on February 2nd and I had successful quadruple bypass surgery. The most important of the three is my daughter’s birthday. I well remember being called to my Army company commander’s office and being informed that my wife was in labor with our first child. Thanks to the USO and a Trailways bus I was able to see my new born little girl the next morning. The date of her birth is important – February 2, 1973. The date is not important just because I love my daughter for the joy she’s brought to my life since that day, but for another reason. Eleven days before her birth, a nation changing decision was made by the Supreme Court of the United States – Roe V Wade which legalized abortion for the first time in America.

Much has changed since 1973. Has America Changed? The United States, once a lending nation is quickly becoming a debtor nation. China, once a feared enemy, has become our chief trading partner and banker. We (the United States) now have a 14 trillion dollar debt. According to the Congressional Budget Office, our Federal Government is projected to spend 1 ½ trillion dollars more this year than it will take in.  Social Security our safety net for seniors is in serious financial trouble. Many fear it will not be there as more retirees line up for their fair share of that which they worked hard for and deserve.

Our roads, bridges and infrastructure are decaying at an alarming rate are in need of extensive renovation or replacement. Most states are overextended and in danger of insolvency. All and all, our nation is on the verge of financial ruin. We borrow 5 billion dollars each day above what we receive in taxes just to pay the government’s bills. The sad thing is that 2 billion (40%) of that 5 billion is used to pay only the interest on what we already owe. It’s like maxing out one credit card then taking out another to pay the interest on the first one. The borrowing and debt at some point will become a house of cards and will collapse from its’ own weight.

Why are we facing such horrific financial difficulties? The old adage that we are spending more than we are taking in is a given. But I believe there may be another factor which is not often mentioned. Since 1973 over 52 million unborn babies have been legally aborted in the United States. Have you ever thought about what this may have cost America?  In 1940 there were 42 workers who underwrote each person who received monthly Social Security checks. Now (according to Prudential Insurance stats) there are 3.3 workers supporting each recipient. If those 52 million babies had been born, they would be moving along through the cycle of life. For the last 20 years, those 18 and older would be in the work force, earning paychecks, purchasing homes, buying cars, having children of their own and paying taxes. What a difference 52 million more souls would make to our present financial picture. We have and are con 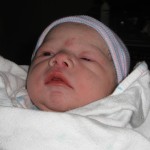 tinuing to literally murder our future, one abortion at a time.

Besides our financial loss, God only knows what else it has cost us. Maybe the cure for cancer was in the future mind of one of those little ones. New technologies that might have finally released us from the grip of foreign oil slipped through the fingers of the abortion doctor’s hands. The voice of a statesman who may have impacted our nation’s future and maybe world history will never be heard.

America has another deficit to worry about and continues to grow each day. It is a deficit of blood – innocent blood. God’s Word is very clear when it comes to destroying the lives of the innocent. The shedding of innocent blood brings with it the wrath of God. He destroyed the people of Canaan for sacrificing their children to heathen gods. I fear we are participating in similar practices by sacrificing the unborn to our gods of selfishness, convenience, and attempts to cover immoral behavior. In God’s eyes, each little one has a face, a name and a soul. They have been robbed of the greatest human right – the right to LIFE. The cost is enormous and it could be that America has begun to pay. As we continue to remove one moral landmark after another, I fear the very foundation upon which our republic has rested safely is cracking and is beginning to disintegrate. If we do not return to God’s prescription for success, America will become just another sick nation which died in the pages of history.

The answer to America’s future does not lay in exporting more goods, importing less oil or raising more money. The answer is so simple and it can be heard from God Himself: Ps 33:10-12 The LORD brings the counsel of the nations to nothing; He makes the plans of the peoples of no effect. The counsel of the LORD stands forever, the plans of His heart to all generations. Blessed is the nation whose God is the LORD. America’s future will be impacted by past and present decisions. We have much to account for. As a nation, we owe a debt we cannot pay. Only God can reverse the direction of America. We must beg Him for a little more time and ask Him, through His Holy Spirit, to change America – His way.