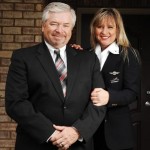 By Charisse Jones, USA TODAY
Roy Harris usually was able to fly straight home to Nashville.
But on a chilly day in late January, Harris, 57, found himself waiting for a connecting flight at Chicago’s Midway Airport. He took off his coat. He reached for his BlackBerry.

The next thing Harris remembers, he was lying in a hospital, recovering from a massive heart attack. Sitting beside him was Rachael Jacobs, a flight attendant for Southwest (LUV), who, back at Midway, called for the defibrillator that ultimately saved Harris’ life.

“I wake up and … the first person I see is this flight attendant,” says Harris, a minister. “If it hadn’t been for Rachael, I wouldn’t be alive.”

Though the public too often thinks their chief duties are to find pillows and ferry soft drinks, the primary duty of the nation’s more than 90,000 flight attendants is to ensure the safety, health and well-being of passengers. With up to 2 million people on roughly 25,000 domestic flights daily, an attendant somewhere in the skies over the USA is dealing with an incident each day. Many can be matters of life and death. And their responses are often heroic.

“I would say we have medical events every day, pretty much around the clock,” says Dr. Thomas Bettes, corporate medical director for American Airlines, who estimates that his airline deals with roughly 20 to 25 life-threatening incidents a year. Neither the Federal Aviation Administration nor the Association of Flight Attendants has statistics on the number of medical emergencies that take place in-flight. But the Sudden Cardiac Arrest Association estimates that more than 400 lives have been saved by automated external defibrillators, or AEDs, on U.S. carriers in the past decade.

The most extraordinary lifesaving events make headlines. In January, the nation heralded the heroism of the three US Airways flight attendants who led 150 passengers to safety after Captain Chesley Sullenberger landed Flight 1549 in the Hudson River.

Yet, more often than the public may know, attendants are called on to save a choking child, to resuscitate a passenger with a failing heart or to evacuate a plane forced to make an emergency landing. They can be called on before even getting on the plane to assist a passenger who falls ill in a lounge or near the gate.

Though their training programs may vary, all airlines must meet FAA guidelines that require flight attendants to be instructed in CPR and first aid.

Each year, they undergo retraining to demonstrate knowledge and skills in a range of tasks, from containing a fire in the cabin to getting passengers off a plane that has to land or “ditch” in water, says Corey Caldwell, spokeswoman for the Association of Flight Attendants.

And since the terror attacks of Sept. 11, 2001, surveillance and self-defense have taken on greater emphasis, as flight attendants look out for passengers who may be a threat and identify those who can help in an emergency.

“The customer service angle is part of the job, but just a small part,” Caldwell says. “When a flight attendant is actually called upon to serve the safety and security function that they have trained so long for, often it’s in a heroic situation.”

The day started quietly at New York’s JFK airport, Jodi Teitelman remembers. Teitelman, a flight attendant for American Airlines, was taking tickets from travelers boarding a Los Angeles-bound flight when a passenger suddenly rushed over and said a woman in the lounge had become ill.

Teitelman, 36, found Anna Tortorici, a grandmother, slumped over, unconscious. With the help of some passengers, Teitelman lay Tortorici on the floor, then ran onto the plane to retrieve the AED and emergency kit.

It was the first time Teitelman used the heart-jolting device on a passenger.

In April 2001, the FAA required U.S. airlines to equip all domestic and international flights with AEDs within three years. As with CPR, instruction on how to use the devices became mandatory for flight attendants and is reinforced regularly. American Airlines put the devices on board in 1997, the first U.S. carrier to do so. Since then, the device has monitored or been used on more than 1,900 people, and has saved 86 lives, according to Bettes.

Tortorici, now 78, is among them. She and her husband, Larry, were returning to their home in Woburn, Mass., from a 50th anniversary cruise in Hawaii. After going through customs at JFK, she briefly lost sight of her husband and became anxious.

She sat down, and, “I guess my heart stopped beating,” she says.

Teitelman placed the defibrillator on Tortorici’s chest. After a single jolt, Tortorici began to breathe on her own and thrash about. Paramedics soon arrived, taking her to the hospital. She later had a pacemaker and defibrillator placed in her chest.

“Of course, I’m grateful to her,” Tortorici says.

In the early days of commercial aviation, the medical function of flight attendants was so front and center that they were required to be medical professionals.

“In the ’40s and ’50s, to get a job as a flight attendant, you had to be a registered nurse,” Caldwell says. Passengers often got air sick in unpressurized cabins.

The stereotype of flight attendants as waitresses or waiters in the sky came later. In the 1960s, airlines began emphasizing their service function as a marketing tool, though they always focused first on safety. “The role has never changed,” Caldwell says.

Robert Putman, 52, has been a flight attendant for roughly 20 years. In that time, he has dealt with passengers who’ve had medical situations ranging from anxiety attacks to strokes.

Most recently, in February, he performed CPR on a man who had stopped breathing on an American Airlines (AMR) flight from Tampa to Dallas/Fort Worth.

Putman says that he’s well-versed in what a medical crisis requires, from alerting the pilot, to asking if there’s a medical professional on board, to practicing the mantra “look, listen and feel” when evaluating a sick passenger.

“We’re taught to do things,” Putman says, “and rarely do we deviate.”

Occasionally, a medical emergency is serious enough that a flight has to be diverted to the closest airport.

That was the case in May for Virgin America Flight 67, on its way from Washington’s Dulles airport to San Francisco.

A passenger felt sick, briefly passing out. Flight attendant Darryl Gregory, 45, alerted the plane’s pilot and went on the intercom to ask if there was a medical professional on board. Meanwhile, another crewmember retrieved a container of oxygen.

Donald Olsen, the plane’s captain, began communicating with MedLink, a service that allows the flight team to get guidance from physicians on the ground, and the airline’s dispatch center.

“When you get on a plane, you don’t know an hour into your flight someone is going to have a heart attack,” says Olsen, 43. “That’s when the teamwork comes into play, because there’re so many things to do, so many questions to be answered.”

A physician on board came forward. But two hours away from landing in San Francisco, the passenger had already used three bottles of oxygen. Following doctors’ advice, Olsen decided to land in Denver.

Watching the crew handle a medical crisis can soothe the fears of other passengers.

Ravi Poorsina, 31, who was returning home to Walnut Creek, Calif., from a business meeting in Washington, D.C., says that she was initially worried the sick passenger could not get the help he needed in the air. But she soon learned he was well cared for.

“I guess it made me feel slightly more reassured,” she said in an e-mail. “To know that the pilots and flight attendants are well trained and experienced is a good thing. You are not alone up there, and that becomes very clear in an emergency situation.”

She also got a better grasp on the role flight attendants play. “It made me understand a little more the pressure they are under, and how tough it must be to keep a smile on your face.”

In Denver, the sick passenger, whom the airline did not identify, was able to walk off the plane, Gregory says.

He admits such incidents are frightening for him as well as for the passengers. When he started out, “one of my biggest fears was … all the training I got, would it kick in when it’s supposed to?” he says.

Each time, Gregory says, it has.

Rachael Jacobs did not think she had saved Roy Harris’ life.

She knew she had tried. Jacobs was living in Chicago and waiting for a flight home to visit her family in Nashville in January.

Suddenly, someone said a man was sick. Jacobs found Harris foaming at the mouth, suffering an apparent seizure.

Not knowing if he was having a diabetic reaction or a problem with his heart, Jacobs yelled for oxygen, an emergency kit and an AED. A nurse and doctor who were in the area jolted Harris with the AED. Paramedics eventually arrived.

But Jacobs thought Harris would die. She grabbed a cab and followed him to the hospital.

“I knew he was somebody’s somebody, and he didn’t deserve to be by himself,” she says. “And so I just got in that taxi and went.” Jacobs stayed with Harris for eight hours. He eventually had quadruple-bypass surgery.

Since then, Harris has given speeches about what he calls “the miracle in Chicago.” And Jacobs has become a close friend.

In some ways, for Jacobs, it was all in a day’s work. Still, “I didn’t do this to be a good Southwest employee,” she says. “My heart told me which way to go, and I just followed.”

Full audio recording of the event by Rachel & Roy on Southwest Airlines Radio. Click on:

Type in “When Rachael Met Roy”